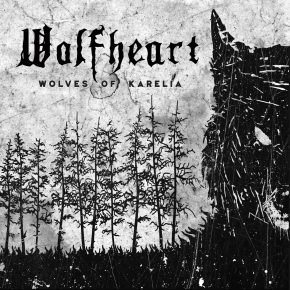 For one reason or another, it took me a while to publish this review. The album is being released tomorrow, and for more than a month I have been trying to make up an adequate sentence that expresses everything I felt when I first listened to it.

It was no surprise that „Wolves of Karelia“ is a sophisticated masterpiece in which, in addition to the melancholy of „Constellation of the Black Light“, there is an incredible dose of rage and power. The album is conceptual and reflects the Winter War between Finland and Russia.

In the eight compositions, the Finnish soldiers play the role of protagonists side by side with their strength, endurance and perseverance. I rarely say that albums have no weak moments, but with WOLFHEART it is well deserved. Even in the sequence in which the singles „Ashes“ and „Hail of Steel“ were released, we find symbolism – one song ends where the other begins. We have a kind of circular composition that accentuates the Finnish heroes as a halo. It’s no coincidence that, despite its earlier release, „Ashes“ is the las song of the album, while „Hail of Steel“  is opening it.

Overall, it seems that the songs are one idea longer than those of other WOLFHEART releases, and this fact seems to reinforce the power in each of the tracks. The proven recipe in Tuomas‘ creativity has the strange charm of not getting boring but carrying something new with each listen. The only exception to the long compositions is „Eye of the Storm“, an almost three-minute-long instrumental in the middle of „Wolves of Karelia“ that gives you the opportunity to rest and feel any emotion that passes through you.

In addition to the darker and heavier direction of the album, we should also note the changes in the band itself: last year longtime guitarist Mika Lammassaari (MORS SUBITA, ex. ETERNAL TEARS OF SORROW, ex. BLOODRED HOURGLASS) left and in his place we findVagelis Karzis (ROTTING CHRIST, FULL HOUSE BREW CREW). He bonded well with the band and this is clearly evident in „Wolves of Karelia“, though regarding writing the music, he only got involved with 3 solos.

Another change is felt in the album – whether due to the impact of the theme, or it is on purpose, the symphonic parts are taken out in the background and the guitars leave the drums to lead and are left on top as a blanket of melodious unbridled rage. This makes the whole album feel like you’re in the middle of a battlefield. Not surprisingly, the interaction between the two instruments is expected, given the fact that Tuomas and Joonas have been working together since BEFORE THE DAWN.

In conclusion, I will say that WOLFHEART is not just a well-working machine, but a perfectly working machine that leaves me largely speechless with every release. Take your time and enjoy the eight compositions, because surely this is one of the strongest albums for this year not only in the genre of melodic death metal, but also in metal as a whole. We remain hopeful that despite the situation outside, we will be able to see Tuomas and company in a few months. Until then, I personally go back to studying the lyrics of the album by heart, because „Wolves of Karelia“ should be experienced with a battle cry and eagerness to run into the fight.

Rating: 12/10
For fans of: WOLFHEART, BEFORE THE DAWN, Tuomas Saukkonen‘s creativity, Finnish perseverance, coldness, melodic death metal and a lot of rage