This time we will introduce you to the young band GWENDYDD. Pure coincidence, courage, a participation in a reality show or just luck brought them together in the name of one of the most universal remedies – music. In the interview are talking Nikifor Nikiforov (Bambi), Vicky Stoichkova, Irena Angelova and Tina Zhelyazkova. 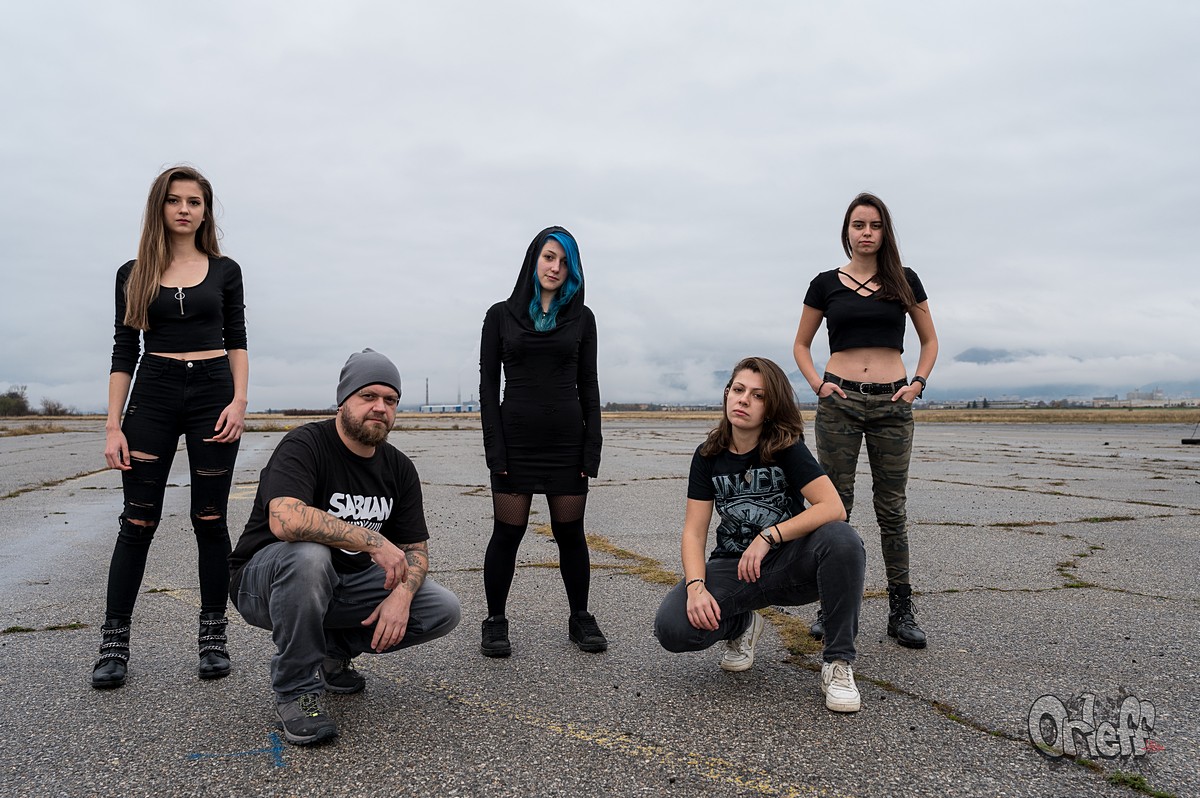 Metal Hangar 18: Whose was the idea for the band?

Bambi: All these questions… Will it sound like me and all the rest? In general the idea is mine. It all existed for a long time, probably more than two years. The initial idea was for the band to be a female one, and I was supposed to be only a producer, manager, etc., but it happened that we tried several options for drummers and nothing worked out.

Bambi: Before that. Generally I have many ideas for songs. Since we are no longer an active band with O.H., and the ideas continued to accumulate, I realized that in Bulgaria there is no band with such a heavy female vocals and playing such a heavy style. The idea was to be something brutal, natural to the point of not being a brutal grindcore and for us to stay “forever underground”. I wanted to make a band that only played my stuff, and of course whoever wanted, they could add and diversify so that it can sound much cooler. As I said, we didn’t succeed with the drummers and at the same time I wanted to play myself, so the girls embraced the idea. Things are going well for now.

Metal Hangar 18: How would you define your style?

Vicky: There was one guy who told us we were melodic deathcore. I cannot define it as such.

Reni: We play what we like. There is no predefined style to stick to. Each song is something very different.

Metal Hangar 18: When did you get together officially?

Bambi: In this line-up? Real – Official…

Vicki: August? Our first concert was in October. Two months before that, so it means August.

Reni: After we recorded the video of „Suicide“, the end of August 2019.

Bambi: We started the project somewhere in the summer of 2018, after the “The Voice Of Bulgaria”.

Metal Hangar 18: Was it then when you noticed the voice skills of Vicky?

Bambi: Oh, yes. This is where I noticed her and I immediately searched for her contacts.

Metal Hangar 18: Vicky, tell us about your impressions of the competition. How did you decide to participate?

Vicky: I was studying music at Voice Academy. With two other girls, Yana and Gabby, we decided to try and find out what it is all about. There was nothing to lose anyway. I chose the specific performance, as until then I haven’t seen anyone in Bulgaria who went on stage that way. I never expected them to turn around. It was super fun. In general I didn’t expect anything, I didn’t do it with any purpose, I just wanted to see what would happen. They forgot to ask me for my name (laughs).

Metal Hangar 18: How old were you back then, and since when are you involved with music?

Vicky: When I participated I was seventeen. Generally speaking, I have been practicing this style of singing since I was 12-13 years old.

Metal Hangar 18: Where did you get your influence from? Which are the bands that impressed you?

Vicky: Mainly SLIPKNOT, AS I LAY DYING, CHILDREN OF BODOM.

Metal Hangar 18: What do you want to express and represent with this way of singing?

Vicky: There is also a lot of emotion in the clean vocals, but somehow in the screaming it seems to be more. Additionally, it’s very cool. If you are super angry, or there is a topic you are super excited about and you want to express it through singing, clean vocals are not enough.

Metal Hangar 18: Alright, it is clear how Vicky ended up in the band, now the rest – will you let the others know how you ended up in this wonderful place? Did you know each other before, for example from school?

Reni: No, no one knew anyone before. We met because of the band.

Bambi: Only I knew Soncheto from before. When Vicki and I decided that we are definitely looking for people, I checked accordingly with familiar musicians and asked them to help us out. Everything came from Vaseto from ODD CREW, who gives guitar lessons. I spoke with him, explained to him what it was all about, and he recommended both of them.

Metal Hangar 18: A question for Bambi – so far neither in O.H., nor in URBAN GRAY there was a female presence. How do you feel about being in a band only with girls? Of course this was what you wanted to do, but is there something that is harder or easier for you?

Bambi: It’s much easier for me to organize everything. Somehow these women jump into a “fight”, nobody asks and hesitates. So far, we have had a fewperformances, but we have been very tight and organized in the preparation, without any excess distractions. There is a complete order in everything. We discuss first and then act. This makes it a lot easier for me, because I would not be able to handle everything and play at the same time. Someone has to help, and here everyone is definitely helping. Frankly, I have never been in a band with such order, no matter how much I wanted it.

Metal Hangar 18: What about the live performances, how are things going now?

Bambi: Things are going well for now. People like us. I have been asked how I managed to gather so many girls, and one dude even said that he was envious of me. We are yet to have much more experiences, this year we have a plan for a lot of events, performances, promotions, etc.

Metal Hangar 18: Do you already have some kind of a tradition between yourselves before concerts?

Vicky: Before the first gig, Reni was hugging a bottle of whiskey and I was drinking “Rescue” drops while we were singing cheerfully. Then we had one drink for starters. It can be a tradition.

Metal Hangar 18: Are you ready for Criticism?

Vicky: Ah… there is “no bad advertising”!

Bambi: I’m ready for anything. Everyone can say whatever they want to say. I am happy with what I do.

Reni: People always have an opinion. The point is that we like it and if people like it as well – great!

Metal Hangar 18: Tell us about „Suicide“. Why did you choose this song?

Vicky: The idea… Basically, everyone can read the lyrics in their own way. In general, the idea came to me because of a friend of mine who had a rather difficult period. She is pretty close to me and I was just thinking what would happen if she endangers her life, how would I react. I told her that the lyrics were for her and she responded very well.

Bambi: On the other hand, the song is the first one we wrote with Reni.

Metal Hangar 18: How did you choose the name GWENDYDD?

Bambi: We made a list of names. They were, let’s say, forty. Everyone liked a few and we had to sit down and check them one by one in the search engine to see if they were already occupied. We wanted it to sound metal in some way and at the same time to have a feminine side. I do not remember who came up with the idea to look at some mythical, mystical, forest things and we came across this name Gwendydd. In various stories she is portrayed as the wife or sister of the great magician Merlin. One story tells how Merlin is imprisoned in a tree, someone has enchanted him, and he has passed on all his knowledge to Gwendydd. There were a few more that sounded interesting, but we settled with that one. Still it’s metallic, feminine, and looks good as a logo.

Metal Hangar 18: In your opinion, is there something like a race between the bands instead of them supporting each other?

Bambi: To me it seems more like helping and supporting each other. I’ve never had any quarrels with anyone or received bad comments. Even with the campaign we launched recently, I saw people from many bands sharing it and I was very pleasantly surprised. Things are moving so that everyone helps the other.

Metal Hangar 18: How many songs will be included in the album?

Reni: Eight, plus an intro and an acoustic version of „Suicide.“

Bambi: A light version of „Suicide“ with an acoustic guitar, with a cajon…

Metal Hangar 18: Is this a challenge for you?

Metal Hangar 18: Vicky, didn’t you give lessons at one time?

Vicky: It is not that I’m giving lessons, but if someone asks me how it is done, I’ll gladly show them. I learned from Youtube videos myself. My mother was a little scared when she listened to me practicing.

Metal Hangar 18: How do your parents react to the music you create?

Vicky: My dad reacted mainly. He said to me, „You’re a girl, isn’t it better to sing something feminine?“

Reni: When I started playing, my parents thought I would give up very easily. They were even convinced of the same, but unfortunately for them, I didn’t give up. Now they help me with whatever they can and support me.

Tina: They support me as well, even though my father loves silence, but today I understood that he is proud of what I am doing because he was telling his colleagues about the band, about the video and my involvement. He usually doesn’t ask me questions and it was very weird when they told me.

Metal Hangar 18: If you could choose to play with any band, which one would it be?

Reni: As a more possible option, I would gladly play with ODD CREW. We all met through Vasko…

Metal Hangar 18: What are your plans for the future?

Bambi: Now we want to get the album done so that we can introduce it outside, to have something we built, to make some more videos to build our history. We have more ideas and no wonder next year we might record another album. I say it again, there are many events upcoming this year and at the same time we will be working on new stuff.

That’s how our meeting with GWENDYDD went. More information about their events can be found on their official Facebook page. If you would like to contribute to the upcoming “Human Nature“ album, you can visit this link. We, Metal Hangar 18 will surely monitor and support the group’s progress.